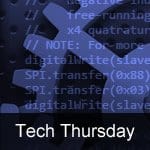 Today’s Tech Thursday is going to be about robot run time. There are different ways of looking at how long your robot will run. It all comes back to how much current your robot requires. We have a forum thread about charging, which is similar to how we are going to be calculating run time.

When designing a robot, we always consider the motors, size, weight and potential run time. Everything plays a part in how much run time you are able to get.

Let’s start with an example robot, one of our ATR platforms.

We will be using 42mm motors and two seven amp hour 12 volt SLA batteries, in series, for 24 volts.  From experience, we know this combination works.

A seven amp hour battery will output 1 amp for 7 hours.   Amps / Hours   (That is a generalization, and battery developers will have all sorts of charts to show actual numbers. For practical purposes, though, let’s go with that)

It’s not aways that simple, though. There are a lot of variables to consider. Using our same robot setup with the current meter, the current jumps up to nine amps when you do a pivot turn. Divide that by the seven amp hours of the batteries, and you get 0.77 hours of run time.

You could counter the extra weight by gearing down the motors. The final speed of the robot would slow, but the current draw would be less (less torque required to drive the wheels).