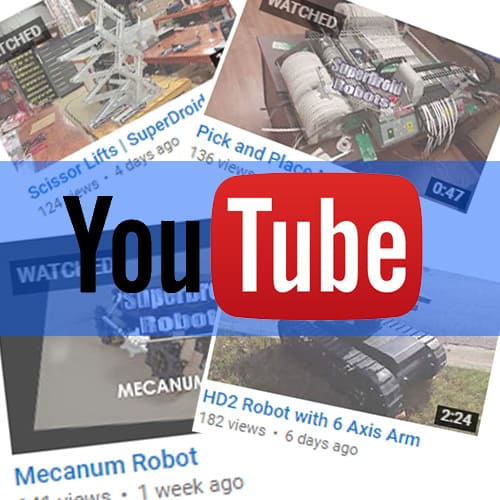 SuperDroid Robots makes some of the most advanced tactical and inspection robots around.  And…..animatronic ATV robots?

We have made some seriously cool new robots over the past few weeks, and we took some time to make some YouTube videos to show them off.

This animatronic robot was created to promote ATV safety. The ATV and mannequin are both controlled from the same remote.

It drives just like a conventional steering ATV instead of using skid-steer like most of our robots. The mannequin is able to look from side to side as well as up and down, and the eyes glow behind the goggles. Strobe effect LEDs are also a feature of this really cool robots.

This robot is a modified version of one of our popular LT2 treaded robots. It is tethered using fiber optic cable so it can go a LONG distance. It’s covered in cameras so the operator will always know what’s going on around the robot.

FIND OUT MORE ABOUT LT2 ROBOTS

Why is it international?  It’s going to Chile! That’s why!

It’s not the first robot we have sent overseas, but the gentleman that came up from Chile to test the robot at our shop could not have been nicer.

Finally, our new autonomous robot. This robot is the definition of ‘point and click.’ The operator selects a point on a map, and the robot makes its way to that point while avoiding obstacles.

How does it do it?  Well, it involves GPS, Lidar sensors, encoders and some fancy programming.

FIND OUT MORE ABOUT AUTONOMOUS ROBOTS

This quirky video shows off the end product of all of the hours we put into this robot in a fun way.

We had a blast making each of these videos, and we are really proud of the robots themselves. Check out our YouTube channel for even more videos, and check back every now and again as we add more!