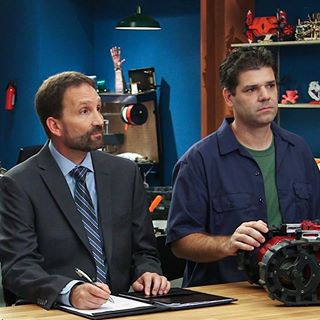 SuperDroid Robots Inc., Fuquay Varina, NC has been designing, building and selling custom robots for first responder, industry, hobbyists, and universities for years. Designing a one of a kind first responder robot for a top big city fire department caught the eye of producers for the Science Channel and is featured in an upcoming episode of their new show ALL-AMERICAN MAKERS.

During the show America’s do-it-yourselfers, innovators and entrepreneurs get the opportunity of a lifetime – to turn their big ideas into big money on Science Channel’s all-new series ALL-AMERICAN MAKERS. The show featuring SuperDroid Robots will air Wednesday, February 18 at 10 PM ET/PT. Every week four top makers from around the nation pitch their products to a panel of three experts featuring Printrbot founder and owner Brook Drumm, mechanical designer and robotics expert Brian Roe, and venture capitalist Marc Portney.

SuperDroid Robots FireBot is featured in the fifth episode airing Wednesday, February 18, 2015 at 10 PM on the Science Channel: “Blood, Sweat and Tears”  World Premiere  Wednesday, February 18 at 10 PM on the Science Channel . Brook and Brian help Marc vet the claims of four new products: as shirt that claims to change colors as muscles heat up; a non-glue that dries at your command; a robot that clears disaster areas for first responders; and a product that hopes to revolutionize prosthetics. See them on Facebook.

SuperDroid Robots owner Charlie Payne and Lead Robotics Engineer Paul Hale filmed the segment on location in New York while putting the FireBot through its paces.

Join the SuperDroid Robots crew for a watch party and the unveiling of their newest invention – the “Keg-a-Droid” a robotic beer delivery system designed in cooperation with the Aviator Brewing company. More details of this debut will be coming soon!