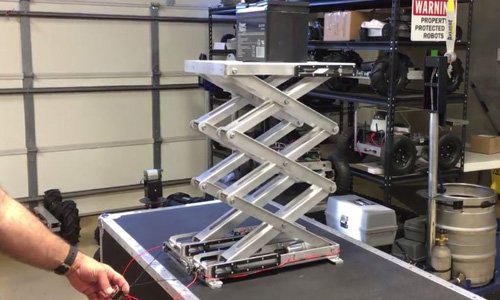 These are two of our 38-inch scissor lifts (WC-063-038) lifting a 35 AH battery that weighs in at 23 pounds. We used lower RPM motors, chain coupled, and some support braces at the top to make a strong and rigid lift.

These lifts are meant to be added to a tactical or surveillance robot. They feature small footprints and deliver visual perspectives that most pan/tilt camera systems can’t. These lifts fit both our standard (WC-003-300) and heavy duty (WC-003-400) 360+ pan/tilt systems. The pan and tilts each weigh less than three pounds – but, as the video shows, the lifts can handle a lot more.